Today dear reader I am on the blog tour for Shrines Of Gaiety (Published 27th September 2022) By Kate Atkinson. A big thank you to the publishers Doubleday for sending me a copy to read and review, always appreciated. Also to the wonderful Anne for the invite to take part on the blog tour, always a pleasure to work with. 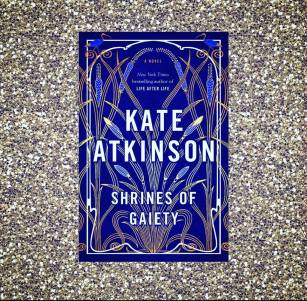 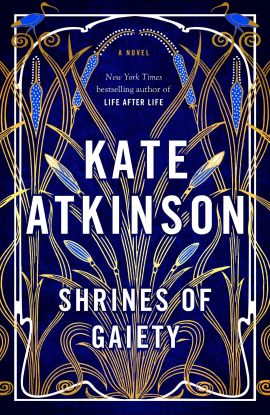 A mesmerising novel set in the glittering world of Soho in the 1920s – a place of gangsters and showgirls, Bright Young Things and one remarkable woman.

1926, and in a country still recovering from the Great War, London has become the focus for a delirious new nightlife. In the clubs of Soho, peers of the realm rub shoulders with starlets, foreign dignitaries with gangsters, and girls sell dances for a shilling a time.

The notorious queen of this glittering world is Nellie Coker, ruthless but also ambitious to advance her six children, including the enigmatic eldest, Niven whose character has been forged in the crucible of the Somme. But success breeds enemies, and Nellie’s empire faces threats from without and within. For beneath the dazzle of Soho’s gaiety, there is a dark underbelly, a world in which it is all too easy to become lost.

With her unique Dickensian flair, Kate Atkinson brings together a glittering cast of characters in a truly mesmeric novel that captures the uncertainty and mutability of life; of a world in which nothing is quite as it seems.

Kate Atkinson is one of the world’s foremost novelists. She won the Costa Book of the Year prize with her first novel, Behind the Scenes at the Museum. Her three critically lauded and prize-winning novels set around the Second World War are Life After Life, an acclaimed 2022 BBC TV series starring Thomasin McKenzie, A God in Ruins (both winners of the Costa Novel Award) and Transcription.

Her bestselling literary crime novels featuring former detective Jackson Brodie, Case Histories, One Good Turn, When Will There Be Good News? and Started Early, Took My Dog, became a BBC television series starring Jason Isaacs. Jackson Brodie later returned in the novel Big Sky. Kate Atkinson was awarded an MBE in 2011 and is a Fellow of the Royal Society of Literature.

The year is 1926 and the country is still tending to its wounds from the Great War. Soho has been set ablaze with the glitz and glamour of its intoxicating nightlife. All manner of people brought together with the promise of drink and girls selling dances for a shilling. The shining jewel of all the nightclubs is the Amethyst, ruled by the Queen of Clubs, Nellie Coker. But there are many lurking in the shadows just waiting for her to fall from grace and snatch her crown. Change is coming, Nellie can read it in her cards. She’s tired and for the first time in her life is weary of the constant drive that is needed to keep her family’s lives moving forward. She can feel the heavy anchor of the Amethyst pulling her under. She knows she will not survive prison a second time around. Maybe it’s time to finally hand the keys over to her children, but at what price? And what dark secrets stalk the alleyways of Soho waiting to pounce on more unsuspecting prey?

The narrative follows array of characters which only strengthens Atkinson’s world. Nellie Coker has just gotten out of Holloway prison after one of her clubs were raided six months ago. She was publicly humiliated as they dragged her away in handcuffs. Chief Inspector Frobisher would love nothing more than to see the whole Coker empire fall like a house of cards as he investigates missing girls. He believes strongly that the Cokers are somehow involved. He needs to get someone on the inside, to find out what really goes on behind closed doors. Who would ever suspect Gwendolen, a librarian who has spent the past few years tending to her dying mother. Now free of her chains Gwendolen seeks out Frobisher’s help to find two missing 14 year old girls Freda and Florence. They have run away to London to find their fame and fortune. They have no idea what dangers lurk behind the curtains. I loved how the Amethyst felt like a character as well. It needs the night to come alive and demands more and more people to be fed. It doesn’t have pretences, pretending to be high end society but it isn’t fishing for scraps in the gutter either. A beautiful mixture of people from all ends of life can be found in the Amethyst, gangsters, writers, artists, ordinary members of the public all rubbing shoulders with each other. It’s an hypnotic scene to behold and entices you further into its clutches.

I found Nellie to be an intriguing character. She is ruthless and determined to not let all her hard work over the years be destroyed. She has worked when she can and saved the pennies, always having a plan in mind. She is an exquisite business woman and believes that one endeavour should finance the next. She has five nightclubs but the jewel in her crown is and will always be the Amethyst. No one gets in for free, not even royalty. Nellie’s clever and when starting out had acquired the services of the law, a policeman, Detective Sergeant Arthur Maddox who would turn a blind eye. Nellie sees nothing wrong with having a good time as long as she doesn’t have to have one herself. Out of sight, out of mind is one of her rules that have guided her life. Everything Nellie has done she has done for her children but not from love, more to protect the future generations, making sure the Cokers will go on until the end of time. She knows she doesn’t have much time left and must prepare, make a plan. Maybe only then will the ghosts from her past stop with their torment.

Absolutely fantastic! I could not put this book down. I was obsessed! Atkinson creates a deliciously absorbing atmosphere that enchants you. I devoured each page greedily and yearned for more. I could not get enough of her writing style, my senses were mesmerised. I loved every second. 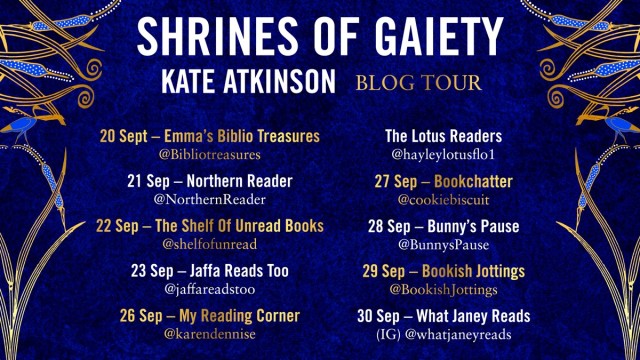 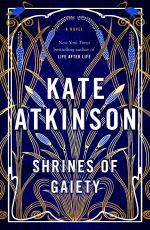 Hello, I'm a Author/Poet/Reviewer/Bookworm/Gamer/Music Lover/Wife and Mother! I review and recommend books as I LOVE to read! I am always on the lookout for new and upcoming books to expand my ever-growing library. If you have something you wish me to read and review, please contact me. I would be delighted to hear from you. Hop hop wiggle wiggle
View all posts by Bunny's Pause →
This entry was posted in writer. Bookmark the permalink.