Today I am on the blog tour for The Attic Child (Published 28th April 2022) By Lola Jaye. A big thank you to the publishers Macmillan for sending me a copy to read and review, always appreciated. Also to the wonderful Anne for the invite, always a pleasure to work with. 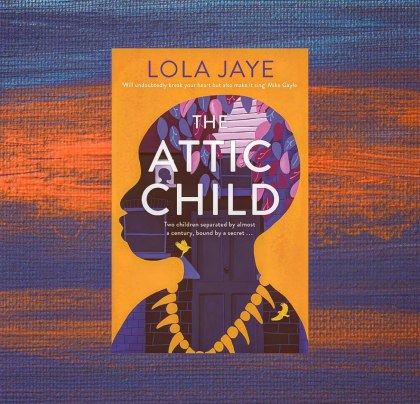 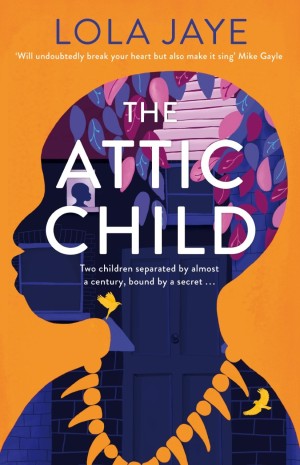 Two children separated by almost a century, bound by a secret…

1907: Twelve-year-old Celestine spends most of his time locked in an attic room of a large house by the sea. Taken from his homeland and treated as an unpaid servant, he dreams of his family in Africa even if, as the years pass, he struggles to remember his mother’s face, and sometimes his real name.

Almost a century later, Lowra, a young orphan girl born into wealth and privilege, will find herself banished to the same attic. Lying under the floorboards of the room is an old porcelain doll, an unusual beaded claw necklace and, most curiously, a sentence etched on the wall behind an old cupboard, written in an unidentifiable language. Artefacts that will offer her a strange kind of comfort, and lead her to believe that she was not the first child to be imprisoned there . . .

Lola Jaye is an author and registered psychotherapist. She was born and raised in London and has lived in Nigeria and the United States. She has a degree in Psychology and a Masters in Psychotherapy and Counselling. She has contributed to the sequel to the bestseller Lean In, penned by Facebook COO Sheryl Sandberg, and has also written for the Huffington Post, CNN, Essence, HuffPost and the BBC. She is a member of the Black Writers’ Guild and the author of five previous novels. The Attic Child is her first epic historical novel.

Told in three parts the narrative follows Celestine and Lowra. Two people who are separated by decades but both have one thing in common, the torment of having being forced to live in the attic at 109 Ranklin Road. From the moment you begin reading Jaye sets the tone for the darkness and trauma that is to come.

The narrative switches back and forth from the early 1900’s to the 1990’s. In the 1900’s the reader follows Celestine, who is taken from his home, the Congo, by Sir Richard an explorer, to live with him as a companion in England. He is to become an English gentleman as he learns to read, write and attends school. However things change take a turn for the worse and Celestine finds himself beaten, face down on the cold, hard floorboards of the dark attic.

In the 1990’s the reader follows Lowra, who is working as a catering assistant at the university café. She despises her boss Mr. Rice who pronounces her name incorrectly on purpose to provoke a reaction. She isolates herself from others, having no friends and spends most evenings in front of the tv as the noise drowns out her thoughts. She is alone and finds there is a safety in keeping to herself. She isn’t like other young girls her age, doesn’t go out or buy make-up and fancy clothes. Lowra wants to feel something, anything and doesn’t feel like she is actually participating in any sort of real life. She has no idea of who she has become. Her past stalks her. The memories of the attic still fresh in her mind.

Lowra’s past, like Celestine’s is a dark one filled with secrets and suffering. She grew up in 109 Ranklin Road for the first few years of her life with a loving mother and father, and for a time she was happy. She has one photograph of the three of them, her mother, father and herself. She often thinks about what could have been if only they had both lived. After her mother died everything changed. The attic became her prison.

It is a phone call that forces Lowra to return to the horrors of her childhood. Nina, her stepmother has passed away and the estate has been left to Lowra. As Lowra finds herself standing outside number 109 with the two lion statues snarling at her she has no idea of the journey she is about to embark upon. She is terrified of entering the attic but forces herself to. She finds the message on the wall that she found all those years ago when she was a little girl along with the items that were hidden under a loose floorboard. A claw necklace, three pieces of paper, and a small doll are among them, items taken from one world and into hers. When Lowra was locked away for days at a time in the attic she would find comfort with the doll, pretending they were having ice-cream and imagined that it belonged to her mother. Lowra becomes determined to find out who these items belonged to and give them back to their rightful owner.  She hopes it will bring her some sort of peace and for the first time in her life gives her a purpose. This leads her to Celestine and she follows his heartbreaking past of how he came to live in the attic. There is a strong connection, a link to them both that is woven delicately throughout the book. They both suffered pain and loss within the attic and know what it is to be completely alone.

Jaye has written two strong, powerful characters that tell their stories of how they survived the abuse and cruelty the world gave them. Celestine has been ripped from his home, his Mama, his brothers and taken to a strange land where he is the minority. Although at first Celestine is not made to work or serve Sir Richard he is still enslaved as his life is no longer his own. His own true name, Dikembe is replaced by Sir Richard as he names him Celestine. For a time while living with Sir Richard he experiences the finer things in life, gains an education and learns to speak like a gentleman. A manner that never falters, even when his own life is threatened. Celestine is also constantly reminded by others that he doesn’t belong and is stared at whenever he ventures outside the house. He is told he is a savage, a beast and this confuses him as he is the most civilised out of anyone. No one sees who he is or of the life he had before he came to England. He is at the mercy of his situation which he both enjoys and despises. The reader watches him struggle throughout, with him trying to figure out his identity while also enduring harsh, tedious labour that leaves him exhausted. But he doesn’t give up and that gives the reader hope.

This book is difficult to read at times, it will break you physically and emotionally. The reality of our history is painted boldly in the blood of the innocent on the page. But this is a book that everyone needs to read. The stories of the unheard and denied need to be told, we need more books like this to make us aware of the absolute cruelty people were faced with on a daily basis simply for being different, for having colour to their skin. It always sickness me that humans were and still are disrespectful to others. I hold onto hope that it will change, it HAS to change. We must all be like the good king Mbidi Kiluwe.

Full of emotion and heartbreak this book is a must read! You have to read this!

Jaye has written a powerful story that will break you again and again. The brutal images of two children fighting to survive will haunt you long after you finish reading.  If you read anything this year, make sure it is this. This powerful story is one that needs to be told.

Hello, I'm a Author/Poet/Reviewer/Bookworm/Gamer/Music Lover/Wife and Mother! I review and recommend books as I LOVE to read! I am always on the lookout for new and upcoming books to expand my ever-growing library. If you have something you wish me to read and review, please contact me. I would be delighted to hear from you. Hop hop wiggle wiggle
View all posts by Bunny's Pause →
This entry was posted in writer. Bookmark the permalink.