You feel the cold mud squelch between your toes as the strong scent of pine lingers in the air. The haar is slowly parting to reveal the towering trees that watch silently over you. You feel something sharp in your hand and run your finger gently over the blade. A sense of calm washes over you and you smile at the stag in the distance. Stepping out of the stone circle you head deeper into the woods. Into the unknown. 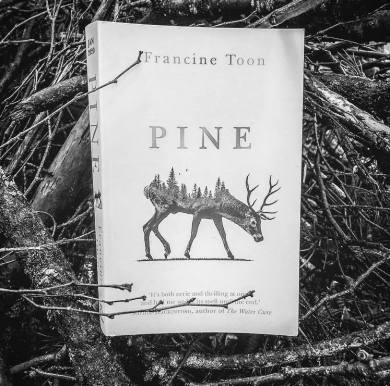 Today dear readers I am kicking off the blog tour for Pine (Published 23rd January 2020) By Francine Toon. A big thank you to the publishers Doubleday for my copy to review, always appreciated. Also the outstanding Anne for the invite, always a pleasure and delight to work with. Thank you.

Francine Toon grew up in Sutherland and Fife, Scotland. Her poetry, written as Francine Elena, has appeared in The Sunday Times, The Best British Poetry 2013 and 2015 anthologies (Salt) and Poetry London, among other places. Pine was long-listed for the Deborah Rogers Foundation Writers Award. She lives in London and works in publishing.

They are driving home from the search party when they see her. The trees are coarse and tall in the winter light, standing like men.

Lauren and her father Niall live alone in the Highlands, in a small village surrounded by pine forest. When a woman stumbles out onto the road one Halloween night, Niall drives her back to their house in his pickup. In the morning, she’s gone.

In a community where daughters rebel, men quietly rage, and drinking is a means of forgetting, mysteries like these are not out of the ordinary. The trapper found hanging with the dead animals for two weeks. Locked doors and stone circles. The disappearance of Lauren’s mother a decade ago.

Lauren looks for answers in her tarot cards, hoping she might one day be able to read her father’s turbulent mind. Neighbours know more than they let on, but when local teenager Ann-Marie goes missing it’s no longer clear who she can trust.

In the shadow of the Highland forest, Francine Toon captures the wildness of rural childhood and the intensity of small-town claustrophobia. In a place that can feel like the edge of the word, she unites the chill of the modern gothic with the pulse of a thriller. It is the perfect novel for our haunted times.

The Highlands are a natural beauty that bewitches the soul and seduces the heart. I should know, we moved here three years ago and I still get breathless at its enchanting landscape. A land full of legends, folklore and magic, it is the perfect location for a haunting tale.

The narrative follows 10 year old (nearly 11) Lauren who lives with her father Niall in a small village in the Scottish Highlands. They are surrounded by a forest of pine and dark, hidden secrets. Lauren’s mother Christine vanished suddenly when Lauren was a baby. No-one has seen her since. She invokes the wilderness, reading tarot cards and claiming she has the sight. She was different and whispers of ‘Witch’ often floated around the village. People talk and all appear to be hiding something. When a local teenager Ann-Marie disappears, events start to blur into a black and ominous abyss where Lauren is uncertain of who she can trust.

The isolated community portrays a feeling of imprisonment. Lauren and Niall’s movements are watched and talked about throughout the village. There is little escape of the judging eyes and untold truths. Lauren is bullied at school by Maisie and her gaggle of friends while Niall does his best to go unnoticed and retreats into himself by drinking down the pub. You desperately sympathise with them as you witness their torment. Especially with Lauren as she’s only a child. I wanted to give her a hug so bad and tell her she is welcome to read my future.

I loved the rich, sensual imagery Toon casts throughout the story. The strong smell of burned wood, honeysuckle and earth was a joy to indulge in. Entwined with the spellbinding echo of Scottish folklore and legends I felt transfixed as kelpies and selkie fowk flooded my head along with spells and magic. Toon also captures the conflict of the damp and rotting stench of reality effortlessly. When the two worlds meet it reeks havoc with the characters, playing mind games, disappearing and erasing memories. They begin to question their grip on reality, sorting out the fantasy from the tangible. You yourself begin to question everything as you are dying to know the secrets and unearth the evil truth.

I enjoyed reading Lauren’s narrative the most as she views the world differently. Like a child, she sees the wonder and magic in everything. She keeps worry dolls under her pillow at night, puts on her mothers lipstick to be close to her and collects pebbles with bits of seaweed to home in the garden with the other pebble people. She also reads in secret her mother’s leather bound book Spaewife’s filled with spells and enchantment. Lauren doesn’t know what it’s like to have a mother and naturally seeks out older female figures such as Diana and Ann-Marie. She later learns that they knew her mum and are determined to find out what really happened to her. It was endearing to see them watch out for her as the poor child is defenceless against the rumours about her family circling the village. There is also Kirsty, her friend Billy’s mum who worries and mothers her while keeping a watchful eye on Niall.

Niall’s relationship with his daughter is strained. He tries to be a good dad, buys her Disney magazines and bakes her pies to make up for his absence. But he continues to spiral into a drunken rage where his mind plays tricks and his memory becomes faded. There are blanks in his narrative as he sinks farther and farther into the void. He doesn’t talk about his wife. He forbids Lauren from entering the posh living room and the wood shed. You can’t help but become suspicious and wary of him the more the narrative unfolds. He is an unreliable character as he doesn’t even know what’s real half the time. It’s an interesting contrast to Lauren’s and reinforces the sense of isolation, even among family.

This book is full of heart dropping moments that made me gasp. I was constantly on edge, waiting for the next thing to spook me. The strong images of a rabbit’s decapitated head, a dog dragging a human arm out from the forest and the smell of decay occupying their disintegrating house added to the uneasy feeling that something was coming. Something bad. This is a story that is going to make you work for the answers and not give you everything you need to know straight away. Always the best kind. Toon takes us by the hand, pulling us deeper into the horrors that are part of life. She shows us that not everything or everyone is as it seems and that monsters do in fact live among us.

You can’t escape the strong scent of pine. It’s built into the characters’ houses and surrounds them, literately. It’s a comforting smell yet also piques your interest to what else lies hidden in the forest. And once we finally discover the truth about everything, it makes the skin crawl. It will give you the creeps.

I give Pine By Francine Toon a Five out of Five paw rating.

Mesmerising and addictive I devoured this in one entire sitting. I was compelled to know the truth. Toon casts a intoxicating spell, overflowing with atmosphere and emotion. I was deeply moved by Lauren and wanted to let her know that everything was going to be ok. She is a gentle, bonnie wee lass with a good heart and mine broke for her unfortunate hand in life.

I can’t recommend this book enough. Not only for its compelling storytelling with emotional characters but it has a gorgeous backdrop. Scotland really is another world dear readers. If you ever get the chance, you should definitely visit. It’s simply breathtaking.