Trains are marvellous inventions, would’t you agree dear reader? They can get you from point A to point B in a matter of seconds, minutes, or hours depending on your destination. They snake through the English countryside without a moment’s hesitation, striking through obstructions that land on the track. Yes, there is the odd delay. But it’s not the train company’s fault if a cow has decided to stand on the line, or worse some poor soul has thrown themselves in front of the non stop service to London. Like us, Trains are annoyingly unpredictable.

Today I am the first stop on the blog tour for Train Man (Published 4 July 2019) By Andrew Mulligan. A big thank you to the publishers Chatto & Windus for my copy to review, always appreciated. And thank you to Anne for the invitation, I love doing these blog tours! Let’s begin shall we, tickets at the ready please.

Andrew Mulligan was born in 1962 and brought up in London. He worked as a theatre director for ten years before travels in Asia prompted him to retrain as a teacher. Having taught in India, Brazil, Vietnam and the Philippines he returned to the UK and now writes full time. He is best known as a children’s author; his novel Trash (2010) has been published in thirty-two languages. He also writes radio plays and film scripts. Train Man is his first adult novel: ‘What was the starting point? I’m afraid it was when a colleague did the unthinkable, and all I could think about was what might have saved him.’

It’s never too late to get back on track. Michael is a broken man. He’s waiting for the 09.46 to Gloucester, so as to reach Crewe for 11.22: the platforms are long at Crewe, and he can walk easily into the path of a high-speed train to London. He’s planned it all: a net of tangerines (for when the refreshments trolley is cancelled), and a juice carton, full of neat whisky. To make identification swift, he has taped his last credit card to the inside of his shoe. What Michael hasn’t factored in is a twelve-minute delay, which risks him missing his connection, and making new ones. He longs to silence the voices in his own head: ex-girlfriends, colleagues, and the memories from his schooldays, decades old. They all torment him. What Michael needs is somebody to listen. A last, lonely journey becomes a lesson in the power of human connection, proving that no matter how bad things seem, it’s never too late to get back on track. Journeys intersect. People find hope when and where they least expect it. A missed connection needn’t be a disaster: it could just save your life.

As the reader steps onto the platform they meet Michael, 56 years old awaiting the 09:46 to Gloucester to reach Crewe for 11:22. We quickly learn he is anxious, a little awkward and has calculated everything down to the last second. With no return ticket needed, Crewe will be his last destination. Mulligan effortlessly immerses you in the moment, transfixed by Michael’s world as you travel alongside him desperate to discover what has brought him to such a final drastic decision. It’s heartbreaking to read as you inhale the sweet smell of tangerines while being startled by the abrupt train announcements.  It’s First-Class writing, sorry, pardon the pun. Couldn’t help it. But it is.

As the narrative progresses we learn that Michael is miserable, broken and doesn’t want to get married. He has lost his job, is in a bottomless pit of debt and keeps being taunted by the unspeakable things he suffered in his school days. As his story slowly unfolds you become attached and wish that there was something you could do to help. To scream out, “Please, don’t do it!” It’s emotional and I felt helpless. Towards the end I saw him as an old friend, a friend that only wanted someone to listen and show him love.

On Michael’s journey to his ever changing fate, he meets a variety of characters. Some more friendly than others. Each has a purpose, whether it was to share experiences or help him find his way. We also had the pleasure of being able to change tracks between a few characters such as Maria and Morris. They always cleverly managed to end up connecting together again, getting back onboard without any further disruptions. Call it fate or coincidence, it makes you wonder how certain everyday encounters can alter your path and change your destiny.

There’s something other-worldly about trains offering small high-speed glimpses into other people’s lives. Trains may appear unreliable at times but that’s the brilliance of them. They have the power to change your whole day simply by being a few minutes late. Train Man captures this exquisitely. With each page turn, you are kept in suspense as to who or what awaits you at the next station.

“Every day was unpredictable, it seemed – but in such worryingly small ways. You never knew whom you would meet, and internally you never quite knew how the brain would deal with the wash of stimuli that came at it the moment you woke up. One smile could change everything, just as a sharp or impatient word could send you spinning off your own fragile axis.”

I enjoyed visiting each station as they were characters of their own in the background, heightening the sights, sounds and smells to the story. Each one different and hosted a whole new opportunity of people for Michael to encounter. It also made me smile at how he viewed the announcements, that they were looking out for him and wished him a safe journey. An unknown voice reminding him to “Mind the gap” and “Stand back from the edge”. A parent figure, and given Michael saying he’s an orphan, it was quite endearing to read and demonstrated how alone this man must feel, he finds comfort in a voice recording.

“All these people wanted was to keep him safe: they wanted him to drink water, and buy his tickets online so as to make savings. They wanted him to plan his journey so as to avoid delays, and claim compensation should anything ever go wrong. When he got up to leave the train, they wanted him to stop and take that extra moment to check he had his bag. In this unpredictable, unknowable world, they could protect him.”

This book handles depression, sexual abuses and suicide in a respectful and relatable way. It doesn’t gloss over it but puts the dark thoughts and horrifying truths out there, in print for all to read. As Michael makes his confession to Maria I was a wreck at his turmoil, I wanted to hug him and give him an even bigger bar of chocolate to gorge on. His brutal honesty of that’s how things are in the world made me distraught and see that you never truly know whats going on in someone’s head. One day they are happy go lucky with life, the next they have said goodbye to the world with a short drop and sudden stop. Mental health is so important and NEEDS to be talked about. I  personally believe this book, this story will help a lot of lost, lonely people crying out silently for aid. It’s never too late to change trains. Never.

There were so many ways this book could have ended, countless possibilities. No spoilers here, you will just have to read and experience it for yourself. It’s worth it. 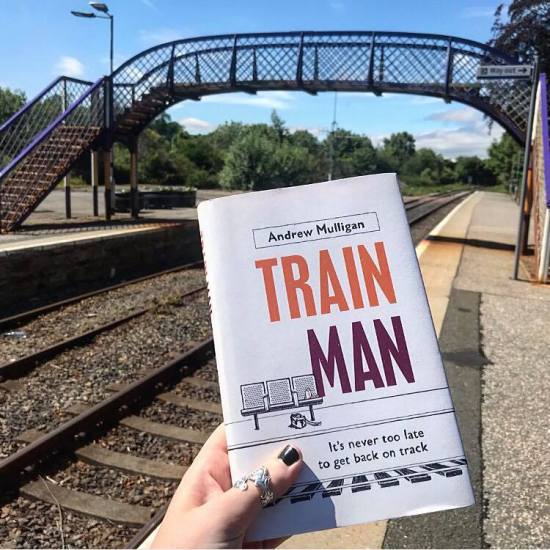 I give Train Man By Andrew Mulligan a Four out of Five paw rating.

This book is literally a lifesaver. It’s never, ever too late, if you’ve missed your connection just wait for the next one or take a chance and find a different route. It sends out an inspiring ,powerful message of not giving up, make the most of your situation and you never know,  you may enjoy the unexpected detour.

*Important Announcement To All Of Our Passengers Taking This Service Today*

If you ever feel lonely, depressed and have thoughts about harming yourself. Please, please talk to someone. You are not alone in this.

Don’t forget to follow the rest of the blog tour, dates below.